Johnny Z, New York’s premier Oldies Disc Jockey and Master of Ceremonies, brings music from the 50’s to the 2000’s to concerts, clubs, parties, and special events.
Johnny Z’s love for music can be traced back to his high school years, when he was part of the singing group The Royal Atesians.  Johnny went on to sing with various oldies groups over the years and was introduced to the world of dee-jaying when asked to fill in for a disc jockey friend. 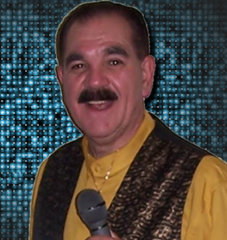 Johnny Z has a vast knowledge of yesterday’s music and as a disc jockey and MC has had the privelage of sharing the stage with many original oldies groups many of which are in the Rock N Roll Hall Of Fame.  Some of local groups that Johnny has worked with on stage along with the Hall Of Fame Groups include Lenny Coco & The Chimes, Johnny Maestro & The Brooklyn Bridge, Larry Chance & The Earls, Kenny Vance & The Planotones and The Del-Vikings, to name a few.
To enhance his 30 years’ experience in the music industry, Johnny worked at WCBS-FM New York, the #1 oldies station in the nation. As a Programming Assistant and Producer in the Programming Department, he assisted the well-known, professional on-air personalities in lining up their shows and spots, screened calller information and took requests.  Johnny also hosted his own top rated #1 highly successful Johnny Z Radio Show on WZAD 97.3 FM in Middletown/Wurtsboro, NY. The spirited Sunday evening program featured favorite and rare doo-wop melodies as well as fascinating trivia and exciting in-studio performances by many of the original artists.
Johnny was also heard on WAXB-FM, B105.5, Danbury and New York’s fun oldies station. Listeners tuned him in on Sunday evenings from 7-Midnight  to hear his top #1 rated “Rock ‘n Roll Revival Radio Show“, the Doo Wop, Street Corner Harmony sounds of the mid 50’s and early 60’s.
Johnny’s #1 Rated Show, “The Original Rock ‘n Roll Revival Radio Show“
on WFAS-FM 103.9 (formerly “The Malt Shop Memories Show” WFAS 1230 AM) aired for 13 years and also was awarded Best of Westchester by Westchester Magazine.
You can now hear the Rock N Roll Revival Radio Show live at WVOX AM 1460, 8:00PM – 11:00PM (EST) and live on the Internet at WVOX.com and Westchestertalkradio.com
Throughout his career, Johnny Z has worked with the best in the business:
– Cousin Brucie: Saturday Nite Dance Party
– Bobby Jay: Hall of Fame, Friday Nite 50’s
– Don K. Reed: Doo-Wop Shop
Ed Baer, Gary Clark, Norm ‘N Nite, Mark Summers, Mike Fitzgerald, The Rock ‘n Roll Radio Greats Reunion Weekends on WCBS-FM 101.1
The “Maestro of Sound & Entertainment” looks forward to bringing you his professional level of performance soon. Johnny Z is a resident of Westchester County, NY and can be contacted on his website under the “Contact” link.
MENU